Discover why FlowGuard Gold Pipe and Fittings is the most well-established non-metallic piping product in the market. 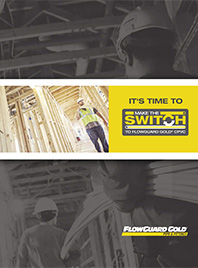 CPVC vs. PEX: Making the Switch

Discover why you should make the switch to FlowGuard Gold® CPVC

In a previous post we discussed the use of the term “or equal” in plumbing specifications and how that phrase is sometimes interpreted to equate PEX and CPVC even though significant differences exist between the two materials in the areas of durability, water quality and performance.

Plumbing specifications often use “or equal” to give plumbers some flexibility in the materials they choose for a particular job. But this can create problems when the phrase is left open to interpretation and chosen materials don’t deliver the performance the specifier expects. The reality is that even among materials that are approved by code, there are differences in how the products perform. These differences may be superficial, such as how the systems are joined, but in some cases the differences can be meaningful enough to affect the performance of the installed system.

Few things are as frustrating for homeowners as persistent plumbing problems. Small leaks not only compromise the integrity of the pipes, they create water damage that can breed mold and lead to a total failure. Fix one problem and another pops up somewhere else.

The Influence of UV Light on Plastic Plumbing Systems

We often get asked about the influence of ultraviolet (UV) light on plastic plumbing systems. The answer to this question, like many others, depends on the type of plastic being used. Different types of plastics have different chemical compositions and those differences affect how they react to UV light exposure.

Home Building 2020: How Builders Can Take Advantage of the Changing Market

Housing starts and home prices have been rising steadily for a number of years; however, that may be changing. There are signs this growth may be plateauing, or even reversing, in some locations:

Since 1959, more than 11 billion feet of CPVC piping have been installed throughout the United States. As CPVC piping has become more popular in new construction, service plumbers have been encountering older CPVC systems more and more. Whether you’re remodeling a bathroom or replacing a hot water tank, dealing with aged CPVC piping is no problem, if you keep these three keys in mind.

When Water Treatment Chemistry Changes, How Will Residential Piping Respond?

It’s natural to think of water as an inert, harmless liquid. But for the water running through municipal distribution systems, great care is taken, and extensive treatment is required to ensure clean, safe drinking water. The source water, whether it comes from a lake, river, reservoir or aquifer, inherently contains contaminants in the form of both dissolved solids and bacteria that requires treatment.

Grove Harris is a vice president of Paul Hasty and Sons Plumbing, a residential and light commercial plumbing service in Brentwood, Tennessee. Grove has been in the business since 1992 and today manages a team of 30 plumbers. His company made the switch to FlowGuard Gold® CPVC in 2004 and continues to use FlowGuard Gold CPVC today. We spoke with him about why they made the change and what it has meant to his business.

Previous All posts Next