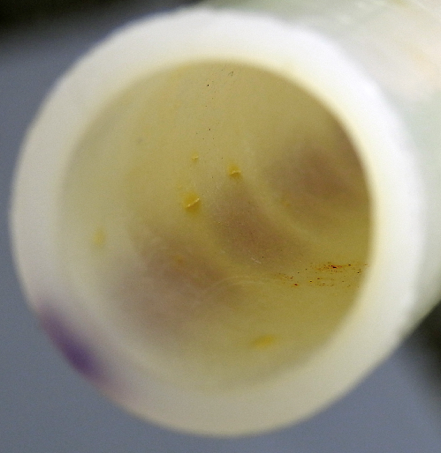 Repiping 101: Identifying the Signs a Repipe Is Needed

No one wants to hear their home needs a repipe. But sometimes that’s the best and only way to prevent future damage from systemic plumbing issues. The challenge for plumbers is determining whether issues are systemic or isolated, particularly for plumbing systems that are well within their expected service life. Some of the signs that a problem may be pervasive can be subtle, but there are guidelines plumbers can follow to determine when to recommend a repipe.

Not all decisions involving repipes are difficult. An easy one is polybutylene piping. Most polybutylene has been removed since the material was the subject of the largest class action lawsuit settlement ever awarded for a building material, but service plumbers still occasionally encounter it today.

With polybutylene, a repipe is always warranted. Not only has the material proven unreliable, but its presence also reduces a home’s value and complicates home sales. Even if buyers are willing to assume the liability, lenders and insurers may be reluctant to back a home with a plumbing system that has been judged to be defective.

The investment in the repipe, therefore, pays dividends not only in avoiding future repairs and water damage but also by increasing the value of the home. Some PEX systems could also fall into this category based on several settled class-action lawsuits. Interestingly, some insurance companies prohibited plumbers who performed repipes under the polybutylene settlement from using PEX to repipe homes because of the similarities between the two systems.

Galvanized iron pipe should also be completely replaced when encountered. These systems have generally reached their expected service life and any galvanized iron piping still in use has likely suffered significant scale build-up and/or corrosion that can create multiple problems for homeowners.

Another case where a repipe is almost always warranted is when a home experiences multiple pin-hole leaks in PEX or copper piping, both of which are susceptible to corrosion and degradation from chlorinated water.

Chlorine degradation represents one of the most common causes of failure in these piping systems and results from incompatibility between the piping material and the water flowing through the pipe. Failures will usually appear first in areas where water temperatures are highest, and then spread to other areas of the system.

That was the experience of the Jackson Family in Battle Creek, Washington. They had a leak under the dishwasher that damaged their kitchen. Soon after that damage was addressed, a pipe in the basement started leaking. Then a third leak was discovered. Service plumbers had a different explanation for each leak but missed the real cause of the failures. It wasn’t until the Jacksons had their plumbing inspected by a material manufacturer representative that the root cause of the problem was identified as incompatibility between the chlorinated water supply and the piping. After months of frustration, the family finally found peace of mind when their home was repiped with CPVC, which is immune to damage from chlorinated water.

While multiple failures resulting from chlorine degradation are a clear sign a repipe is required, even a single chlorine-related failure could warrant a repipe. Some plumbers may be reluctant to make this recommendation, particularly if the system isn’t that old, but it may prove to be the best course of action for the homeowner.

The age of the system shouldn’t be the determining factor when deciding whether a repipe is required. After all, there’s a reason PEX warranties often include exclusions that void the warranty when chlorinated water causes a failure. It can be very difficult to predict how local water conditions will affect PEX piping. The plumbing system in the Jackson home was less than 10 years old when pipes started failing and the repiping specialists at Plumbing Express have shared that they routinely “see problems with PEX in homes that are less than 20 years old.”

In these situations, the failed pipe should be closely inspected to determine if the failure was due to the effect of chlorine on the pipe. Look for cracking along the length of the pipe, permeation of the print line into the inner wall of the pipe and “popcorning” of the exterior wall of the pipe. These are all signs of degradation that is likely to be systemic. 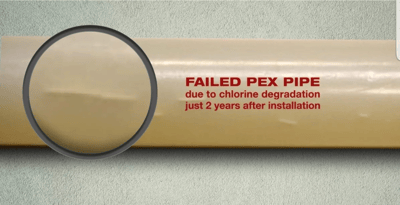 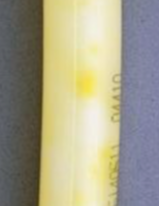 Examples above of Permeation, Cracking, and Popcorning.

Homeowners may balk at a repipe after a single failure, but at least you’ll have laid the groundwork for when the next failure occurs.

All plumbing materials can be weakened by exposure to certain chemicals. In most cases, compatibility issues occur when incompatible materials come into contact with the exterior of the pipe. These failures will typically be isolated to the area of exposure and are discussed in the next section.

Less likely are exposures to the inside of the pipe that could occur if the water becomes contaminated with incompatible chemicals, such as those in some solvents, plasticizers or petroleum-based oils. If internal exposure to incompatible chemicals has already caused one failure, it is likely the whole system has been compromised and should be replaced.

Failures due to installation errors are another example of cases that are usually isolated but occasionally require a repipe. With PEX this is often due to fittings that have been improperly seated or crimped. A failure at a fitting could represent an isolated error in an otherwise proper installation or it could be a sign of an inexperienced plumber who repeated the same mistake with every fitting. The same is true with CPVC and the issue of “dry fits.” The installer may have forgotten to solvent weld just one fitting or many throughout system.

With PEX systems, common methods of accounting for expansion and contraction could actually increase the risk of chlorine-induced failures caused by stress from flexing the pipe where it has been bent. These failures can be identified by circumferential cracking that is often misdiagnosed as damage from nicking or scratching during installation. If you see this type of cracking, don’t blame the construction crew as the culprit could be the material itself. The flexible nature of PEX piping is considered one of its strengths, but it can become a weakness after the pipe is exposed to chlorinated water.

As mentioned previously, failures due to chemical incompatibility from a material contacting the exterior of the pipe will typically be isolated to the area of contact. For CPVC, this could involve the improper use of vinyl-coated or rubber hangers, which can contain plasticizers that weaken the pipe. Use the FBC™ System Compatible Program to identify materials that are compatible and incompatible with FlowGuard Gold CPVC.

PEX is known to have compatibility concerns with closed-cell insulation, organic chemicals, strong acids, strong bases, solvents, petroleum distillates and adhesive tapes, so keep an eye out for these when investigating the cause of a PEX failure.

Exposure of plastic piping to incompatible chemicals can occur during construction or during the life of the system. Stub-outs under sinks can be particularly vulnerable to this exposure due to the variety of chemicals that are often stored in these locations. If you encounter a failed stub-out under the sink, replace it with a copper stub-out. For FlowGuard Gold CPVC we recommend the Sioux Chief CPVC-to-copper stub out.

Another case where repiping is typically not required is failures that may occur in older CPVC systems during a cut-in for repair. CPVC retains its pressure bearing capability as it ages, but the material does become more rigid and can be damaged if cut with rachet-style cutters. The manufacturer-recommended tool for cutting into existing CPVC systems is a C-style tubing cutter. A fine-tooth saw or wheel cutter can also be used. When cut properly, older CPVC can typically remain in service. If improper cut-in procedures cause damage to an installed CPVC system, the damaged area should be removed by properly cutting the pipe at least 2 inches beyond the end of any visible crack.

When water incompatibility is causing failures, repiping with CPVC is the best solution to give homeowners peace of mind. CPVC is the only residential plumbing system that is immune to chlorinated water, and it is easy to work with in existing homes. CPVC piping is flexible enough to snake through walls but not so flexible that it will coil when being pushed. CPVC fittings are also easy to join in tight spaces, making the ideal choice for repipe contractors.

To learn more, download our guide on how FlowGuard Gold CPVC can help grow your plumbing business.