It’s important to consider expansion and contraction when installing FlowGuard Gold CPVC piping systems. If the system doesn’t allow for thermal expansion, these changes in length can put stress on the pipes or fittings, increasing the risk of a failure in future years.

FlowGuard Gold will expand about 1 inch per 50 feet of straight pipe for every 50°F increase in temperature.

The most important factor in determining how much expansion or contraction will occur in a FlowGuard Gold system is the temperature of the pipe at the time of installation. If the pipe is installed in unusually cold weather the pipe will be shorter at installation than it will when it is in service. This can be a major factor in hot water lines where a 50-foot long run of pipe installed at 20ºF would expand up to 2” when in service at 120ºF.

While hot water lines are most likely to be affected by expansion and contraction, cold water lines can also be affected when the installation was done at unusually high or low temperatures.

When not properly accounted for, thermal expansion can place excess stress on the system. In the example above, a 100ºF change in temperature on a 50-foot run would be the equivalent of about 1200 pounds per square inch of compressive stress on the pipe or fitting.

This force can lead to problems such as cracked fittings and distorted or cracked pipes. In many cases, these problems can take years to develop because the system will withstand the excessive stress for some period of time before failing.

To avoid these problems, always allow for expansion and contraction by following these simple best practices: 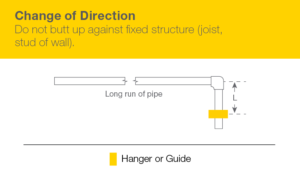 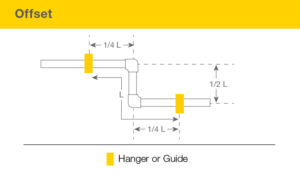 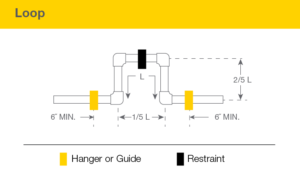 Learn more about how to avoid issues with expansion or contraction by using our expansion loop calculator.