Plumbing engineers are increasingly being asked by owners and developers of multi-family, multi-story buildings to use specific materials in their designs. Usually, those requests are motivated by financial interests, such as the costs savings that can be realized with plastic plumbing systems. Some plastic systems, such as CPVC, can deliver excellent reliability and performance, but not all plastics are the same.

Polyolefin plastics, such as PEX and polypropylene, can introduce risks and impose significant limitations on the designs for multi-story buildings as water combability concerns become more prevalent, particularly as municipalities continue to evolve their water treatment practices. Here are some of the factors engineers need to consider when designing plastic plumbing systems for today’s evolving water conditions.

The chlorine resistance of PEX is tested to ASTM F2023, and some engineers may assume that chlorinated water is not an issue for PEX pipes that meet the ASTM F2023 standard. But it isn’t that simple. ASTM F2023 is a test standard designed to extrapolate a time-to-failure under a specific set of water conditions. The standard itself notes (emphasis added): “The performance of a material or piping product under actual use conditions of installation and use is dependent upon a number of factors including installation methods, use patterns, water quality, nature and magnitude of localized stresses, and other variables of an actual operating hot-and-cold water distribution system that are not addressed in this test method.”

The Plastics Pipe Institute’s Technical Note 53 (TN-53) discusses three conditions beyond the scope of the ASTM F2023 test that can accelerate chlorine degradation in PEX pipes, increasing their likelihood of premature failure. These include:

FlowGuard Gold CPVC does not require chlorine resistance testing, because the material’s chemical composition makes it immune to chlorinated water. In fact, if tested to ASTM F2023, a FlowGuard Gold plumbing system would have an infinite extrapolated life because it would never fail due to chlorine-induced oxidative degradation.

While the pressure and temperature limitations of PEX can require design compromises, they are at least controllable by plumbing engineers. The third factor identified by TN-53, an ORP of 825 mV, is not.

When ASTM F2023 was first published it was generally assumed that an ORP above 825 mV was a rare occurrence. Since the original research was conducted more than 20 years ago, water utilities have made significant changes to their water treatment practices addressing modern water quality concerns, including new forms of bacterial and viral contamination and increasingly diverse water sources.

Many in the industry have focused solely on the role of chlorine-based disinfectants in determining ORP, but this ignores the contribution that dissolved oxygen, metal ions and salts have in increasing the ORP in drinking water. In addition, as municipalities have evolved their water treatment practices, they have increased the ORP in the process to provide better disinfection. Because ORP is essentially a measure of water’s ability to neutralize biological contaminants, a higher ORP is desirable from a water treatment professional’s perspective. 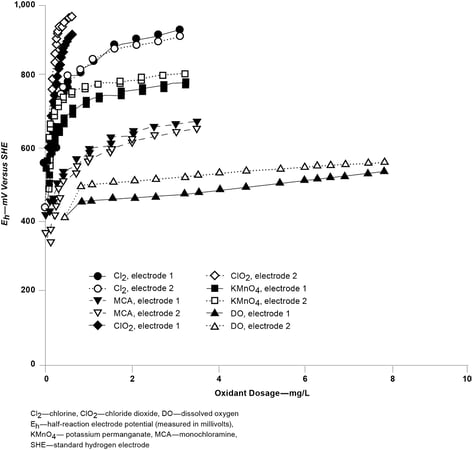 The use of chlorine dioxide water treatment has already been linked to one high profile failure in HDPE water mains and HDPE is the base polymer for most PEX pipes.

It’s rare for plumbing engineers to have ORP data available to them during the design process, and even if they did, that data would not be particularly helpful. ORP is very dynamic, meaning the rate will be different at different points in the system and when taken at different times. What’s more, even if an engineer could confirm that that the ORP for a particular building was consistently below the 825 mV threshold, there is no guarantee that the municipality wouldn’t change its processes in the future.

As a result, PEX’s susceptibility to degradation based on the water system’s ORP introduces a level of uncertainty that many engineers—and building owners—aren’t comfortable with.

Unlike ORP, water pressure and temperature conditions can generally be controlled by plumbing engineers to stay within the operating conditions discussed in TN-53. But that may require some compromises that building owners should be made aware of.

For example, ensuring water temperatures do not exceed 140° F can limit the owner’s ability to combat waterborne bacteria. Optimal growing temperature for waterborne bacteria range from 40° F to 140° F. With concerns around legionella growing, it is becoming more common to store hot water above 140° F, a strategy PEX pipes can’t support within the limits of its chlorine rating, increasing the risk of failure. PEX plumbing systems can also impede efforts to fight bacterial contamination when flushing the system with hot chlorinated water as it can not only damage the pipe, but the chlorine inhibitors added to PEX can neutralize some of the chlorine before it kills the bacteria.

FlowGuard Gold CPVC can support designs that limit waterborne bacteria as it is rated to 180° F at 100 psi regardless of water chemistry.

Managing the pressure rating of a PEX system to not exceed 80 psi can also limit design flexibility, especially in taller buildings. Use of a gravity feed system for distribution should be avoided as pressures in these systems can exceed 80 psi. Where street pressures are above 80 psi, pressure regulators should be employed but there is always the risk that these mechanical devices could fail over time or be adjusted to address low-pressure complaints from residents on the upper floors of a building. Booster pumps should also be used with extreme caution in buildings with PEX piping to avoid exceeding the 80 psi limit.

Additionally, the limits of PEX’s chlorine resistance can impact the design of hot water recirculating systems, requiring significant upsizing, which offsets much of the cost savings building owners may be expecting. In response to documented incidents of ¾-inch PEX failing, PEX manufacturers have recommended that piping be upsized to 1-inch or 1-¼-inch, presumably to reduce the velocity in the system. Some PEX manufacturers and model plumbing codes limit water velocities in PEX hot water recirculating systems to 2 feet per second.

Building owners have a lot to consider when developing a new project and they can’t be experts on every building system. If they are asking for PEX piping, make sure they understand the limitations of that system and how to mitigate the associated risks. Or propose FlowGuard Gold CPVC, a system that delivers the cost savings and reliability they are looking for without imposing chlorine-related limitations on your design.