After the widespread failures of polybutylene in the 1980s, ASTM F2023 was developed to evaluate the oxidative resistance of PEX piping in hot chlorinated water. Today, all PEX and many other polyolefin piping systems, including PPR, PP-RCT and PE-RT, are evaluated to ASTM F2023. But this standard is not without its limits.

The Plastics Pipe Institute has issued Technical Note 53 which identifies three conditions that can accelerate the time-to-failure for PEX piping. Two of these conditions are well known to the plumbing industry: temperature and pressure. Water pressures above 80 psi and/or temperatures above 140° F can each increase the rate of chlorine attack within PEX piping, causing degradation and failure long before the rated service life per ASTM F2023.

Temperature and pressure factors can be easily monitored and, in some cases, controlled through good design, equipment selection and maintenance. However, the third factor identified in PPI TN-53 is a relative unknown to the plumbing industry.

That condition, which can cause premature failure in PEX piping, is water with an Oxidation Reduction Potential (ORP) rate above 825mV.

ORP is a measure of a substance’s ability to oxidize another substance. When applied to natural water systems such as lakes and rivers, it measures the ability of the water to break down waste, such as contaminants and dead plants. When the ORP value is high, the water is better able to prevent the growth of bacteria and the formation of harmful algae blooms.

Because high ORP is important for sanitizing drinking water, municipal water systems increase the ORP through the use of disinfectants such as chlorine, chloramine and chlorine dioxide to ensure it is safe for human consumption.

Other factors can also increase the ORP in a residential water system, including the amount of dissolved oxygen in the water, the temperature and pH of the water and the presence of metallic ions and salts, such as the potassium permanganate often added as a corrosion inhibitor in water treatment. As a result, the ORP of the water on your project represents the cumulative impact of multiple chemical and natural factors.

ORP is very dynamic, meaning the rate will be different at different points in the system and when taken at different times. While there are devices that can measure the ORP of water, this variability can make it very difficult to determine whether the ORP in your projects is above or below the 825mV limit for PEX piping systems.

In addition, as we pointed out in a previous post, the amount and types of chemicals used in a particular water treatment system are subject to change without notice so there’s no guarantee ORP rates won’t rise in the future and put vulnerable plumbing systems at risk.

How High is the ORP Threshold?

It would be easy to assume that if PEX is approved for use in residential plumbing, the ORP threshold at which PEX becomes vulnerable must be so high as to never be seen in the real world. When ASTM F2023 was first approved in 2000, the industry relied on a 1996 AWWA study that only reported the pH and free-chlorine conditions of American drinking water.

Unfortunately, the original research neglected to consider the ORP contribution of dissolved oxygen, metal ions and salts. When that oversight is combined with 25 years of evolution in water treatment practices, it is no longer safe to assume that 825mV is a safe threshold.

In fact, recent research suggests that an ORP at or above 825 mV could be fairly easy to achieve in domestic plumbing systems. The chart below shows the individual contribution of various chemicals and dissolved oxygen on ORP with the red line (added by Lubrizol) shows the maximum ORP for PEX plumbing systems. 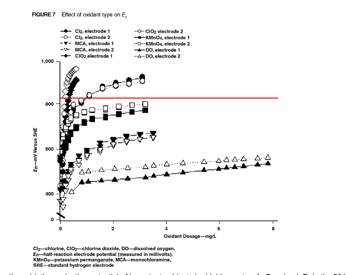 Note that chlorine dioxide, a chemical being used more commonly in water treatment today, can rapidly raise ORP above the threshold even at very low levels. When multiple oxidizers are present in the water, the ORP threshold for PEX degradation can be exceeded more frequently than is generally recognized.

Eliminating the Risk of Pipe Failure from High ORP Rates

FlowGuard Gold® CPVC is not subject to ASTM F2023 testing because of its natural resistance to oxidative degradation from chlorine. In other words, due to its chemical composition FlowGuard Gold CPVC will not experience chlorine degradation under the temperature, pressure and ORP conditions that can cause PEX to fail.

That’s why switching from PEX to FlowGuard Gold CPVC is the most effective strategy for protecting plastic piping systems from rising ORP rates and other conditions that leave PEX vulnerable to chlorine degradation. Plus, FlowGuard Gold pipes and fittings offer lower costs, less pressure drop and improved environmental performance.

Don’t risk the premature failure of the plumbing systems you specify or install. Make the switch to FlowGuard Gold CPVC. View our webinar, How to Specify Plastic Potable Water Systems, for a detailed discussion of plastic plumbing specification considerations.