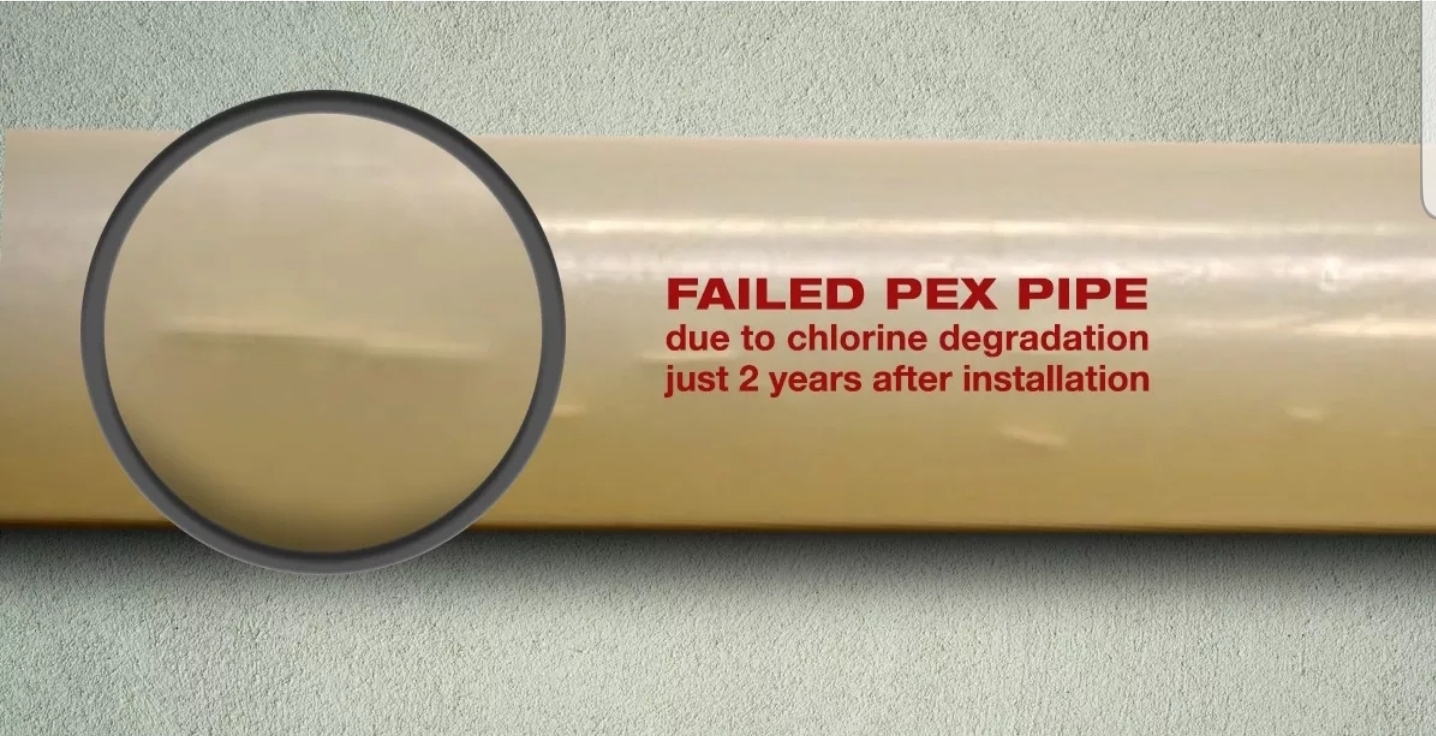 We recently conducted a short quiz designed to gauge plumbers’ knowledge of plumbing material characteristics and the right tools to use with different materials. Among the results was the finding that 42% of plumbers mistakenly attributed a classic case of PEX chlorine failure to UV light. 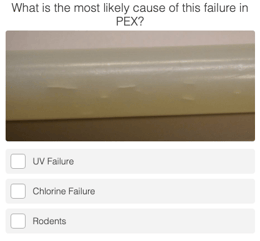 Caption: Quiz respondents struggled to identify the cause of a relatively
common PEX failure illustrated in photograph

This mistake is understandable because UV light can be a contributing factor to chlorine failure; however, it doesn’t actually cause the failure. What it does is consume the antioxidants added to PEX to protect the material from chlorine.

Premature loss of antioxidants in PEX isn’t limited to UV light. Certain materials that come into contact with PEX can have a similar effect—draining antioxidants from the pipe. This may be even less well understood as a contributor to PEX failure than UV light.

Does PEX Have Compatibility Issues?

Chemical compatibility is different for CPVC and PEX due to the different molecular structures of the two materials. CPVC is naturally resistant to chlorine and doesn’t require additives to protect it from chlorine, but it is incompatible with certain chemicals that can cause it to fail by softening or cracking.

Lubrizol Advanced Materials has done extensive research to identify materials that are compatible with CPVC, developed the FBC system compatible program, and consistently educate plumbers and engineers about the many materials that can be used with CPVC. As a result, plumbers have a trusted resource they can use in ensuring proper installation of FlowGuard Gold® pipes and fittings.

PEX has a different set of issues due to PEX pipes and fittings inherent susceptibility to chlorine degradation. PEX manufacturers fortify the material against chlorine by adding antioxidants during the manufacturing process that protect PEX from chlorine. However, these antioxidants are “sacrificial” in that they are consumed by the action of neutralizing chlorine’s impact on the pipe. The longer the pipe is in service, the fewer antioxidants remain to combat the effect of chlorine on the pipe.

These chlorine-inhibiting antioxidants in PEX pipes are also subject to leaching, both into the water and into certain materials that come into contact with PEX. This leaching represents a type of “compatibility” issue with PEX that has not received the same attention as compatibility issues with CPVC. Yet, it has the same potential to cause damaging pipe failures.

In the same way, PEX’s ability to resist chlorine degradation is compromised by the chlorinated water flowing through the pipe, UV light, contact with incompatible or leachable products, and possibly other factors. The difference is that unlike the body, which can create new antibodies when it needs them, PEX is manufactured with a set amount of antioxidants, and there is no way for the pipe to replace them after they are lost. Once they’re gone, the pipe is left vulnerable to chlorine degradation.

When outside chemicals, including other plastics, come into contact with PEX, the chlorine-inhibiting antioxidants naturally migrate or leach from the PEX pipe, where they are concentrated, to the other material until a balance exists. That leaves the pipe with fewer antioxidants to deal with the chlorine in the water and can contribute to chlorine failure.

If you’ve ever taken the time to read the detailed instruction guides from various PEX manufacturers, you may be aware of some of the common compatibility concerns in these materials, but most contractors are unfortunately unaware of just what is, or is not, compatible with PEX plumbing systems.

While reviewing each individual manufacturer’s guides is the best resource, you can also view a list of compatibility concerns – along with other important, but little known, PEX installation guidance in our PEX sample specification. Among the items of concern you will find common materials such as:

All of these products can leach out the chlorine-inhibiting antioxidants, leaving the pipe unprotected. In addition to leaching out antioxidants, these materials may also threaten water quality through permeation, another challenge with PEX piping that plumbers must navigate.

Chlorine failure may be accelerated by the leaching, but it won’t be immediate. It could take years for the pipe to degrade to a point of failure. As a result, some of the issues that affect PEX can remain hidden for years. This gradual nature of the failure makes it difficult to proactively test for compatibility without doing expensive chlorine resistance tests over extended time periods for a wide variety of materials.

PEX is still a relatively young material and there is a lack of good information about all of the things that impact its performance and lifespan in real-world conditions. Even PEX manufacturers continue to learn on the fly about the materials and operating conditions that can cause premature failure of the systems.

The Known vs. the Unknown

Because of failures that have already occurred, we know some of the issues that can lead to premature PEX failure, but likely not all of them. There is still a lot to learn about PEX and its longevity under certain conditions.

Don’t risk the premature failure of the plumbing systems you install. Make the switch to FlowGuard Gold CPVC. Download our Potable Water Sample Specification and compare the PEX sample specification to see the benefits.