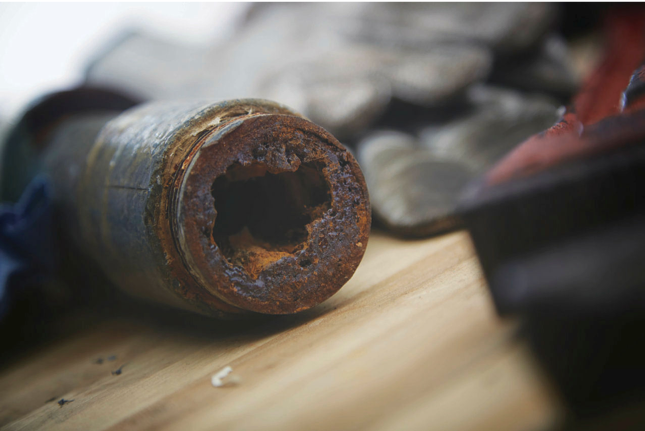 When plumbing materials break down due to age or incompatibility with local water conditions, a repipe of the home should be considered. While replacing existing plumbing materials is always a last resort, it is sometimes necessary to correct systematic problems

Different materials age differently, and their aging is often dependent on local water conditions. Copper piping, for example, may perform reliably in one home for 50 years, but show signs of early failure in another after just a few years.

So, while the age of the pipe is a contributing factor, you don’t necessarily need to replace pipe just because it is old. There are visible signs of aging for some piping materials that can be early indicators of the need for replacement.

Internally, copper piping will show signs of corrosion in the form of discoloration or a general thinning over significant lengths, which may be visible during repairs. You may also notice greening on the outside of the pipe, which is a sign of internal corrosion. If there are extensive patches of green, the pipe may be nearing end of life. If signs of corrosion are small and isolated, potential failures may be limited to specific sections of pipe, such as those touching other metal and a total repipe may not yet be required. 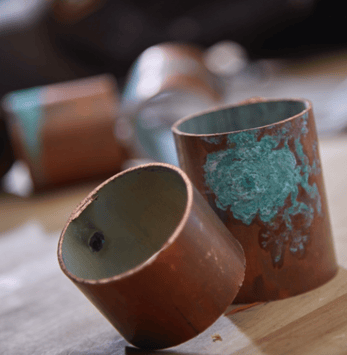 In clear or translucent PEX piping, look for a popcorn-like localized discoloration or subtle bubbling on the surface of the pipe. This is a sign the pipe is experiencing chlorine degradation, which can lead to pinhole leaks and failure. Again, if this is widespread, replacing the entire system may be necessary before leaking creates water damage. In red, white or blue colored PEX piping the effects of chlorine degradation may not be visible until a pinhole leak occurs.

CPVC piping will discolor as it ages, but, in this case, the discoloration does not indicate reduced performance of the pipe. Instead, CPVC’s pressure-bearing capability actually increases with age. CPVC does lose some if its impact resistance as it ages, requiring specific, readily available tools be used when cutting older CPVC, but it will continue to provide reliable service, as long as it was properly installed and maintained.

While there are visible signs of corrosion on PEX and copper piping, many homeowners won’t undertake the expense of replacing their piping system until they begin to experience persistent leaks or failures of pipes. If multiple repairs to sections of pipe occur, a repipe may be necessary to reduce homeowners’ costs, and the likelihood of mold developing in the home.

In homes that have older galvanized iron pipes, low water pressure and/or brown discolored water are other signs to watch for. Corrosion in the pipes over time can cause the pipes to become clogged. That’s not only an inconvenience, it’s a sign the pipes need to be replaced with new materials.

Are Materials Old or Faulty?

There are also cases where plumbing materials have been installed that have either proven to be unsuitable to local water conditions or exhibited manufacturing defects and were thus subject to class action lawsuits.

For example, polybutylene was introduced in the U.S. market in 1975 and used through the mid-1990s. But the material proved to be unreliable and a 1995 class action lawsuit, Cox vs. Shell Oil Co., resulted in a $950 million fund to be used by qualified homeowners to replace polybutylene piping. This effectively ceased the use of polybutylene in residential plumbing but didn’t necessarily resolve all homeowners’ problems.

The Cox vs. Shell Oil settlement specified an "eligible claimant" as having a "qualifying leak" before Aug. 21, 1995, or afterward and within 10 to 16 years of the piping's installation. That left some homeowners who didn’t qualify continuing to live with polybutylene pipes, many of which would eventually fail.

A lawsuit was filed on their behalf in 2017 but was dismissed. Consequently, they are left having to foot the cost for repairs themselves. If a house with polybutylene is being sold, many home inspectors will flag the material and buyers may ask that the home be completely repiped as a condition of sale.

PEX piping has also been subject to class-action lawsuits designed to compensate homeowners for the cost of repairs based on faulty materials. The most recent was settled in 2018 when NIBCO, a PEX manufacturer, agreed to pay $43.5 million to homeowners who had to replace leaky PEX piping.

Choosing the Right Material to Replace Aging or Faulty Piping

Today, a plumber has three materials to choose from when replacing older piping: copper, PEX and CPVC.

Some continue to trust copper because of its long track record of service, but two factors are making copper less attractive: compatibility with water treatment chemicals and cost.

As municipal water treatment facilities are serving more homeowners in outlying areas, they are making changes to the chemical disinfectants they use, choosing chemicals that can retain their disinfectant qualities for the longer runs required to reach outlying areas. In particular, many are changing from chlorine to chloramine, which is proving hard on copper pipes. There is growing concern among many homeowners that chloramine has accelerated the degradation of copper piping, shortening life expectancy and leading to leaks.

Copper is also two or more times more expensive than plastic alternatives. When you’re talking about replacing all of the pipe in a home, that translates into significantly higher project costs.

PEX is one of the plastic alternatives to copper that has emerged in the last twenty years. Like copper, PEX can suffer degradation caused by the chlorine and chloramine used in water treatment. If you choose PEX you’ll want to check the manufacturer’s warranty for your piping. Many PEX manufacturers warranties contain exclusions for damage to the system caused by water conditions. Under these exclusions if a PEX system fails due to corrosion or degradation caused by the water flowing through it, the warranty will not cover damages or repairs.

PEX is also susceptible to permeation and leaching that can allow undesirable chemicals to enter the water supply. It also has a higher biofilm growth potential than the primary plastic alternative, CPVC. Biofilms that form in residential water pipes can include dangerous bacteria such as E. coli, coliforms and legionella.

Another factor to consider is the impact of PEX fittings on flow rates and pressure. While CPVC uses socket-style fittings, PEX pipe fits around the outside of the fitting, reducing the internal diameter within the fitting. As a result, the best performing PEX fittings have pressure drops that are roughly six times higher than an equivalent CPVC fitting. When converting from a copper system to PEX, homeowners may experience a noticeable reduction in water pressure and volume, as well as longer wait times for hot water.

CPVC is a plastic material but is chemically very different from PEX and has a much longer track record in the U.S. CPVC is a chlorinated compound, making it impervious to degradation from chlorine and chloramine that plagues other plumbing materials. CPVC is also less expensive than PEX and has a life expectancy similar to copper. In many ways, CPVC offers the best of both worlds by delivering durability similar to copper at cost that is below PEX.

Understanding the Problem and the Right Solution

While the typical plumbing contractor conducts business with integrity, there are unfortunately some that incentivize employees to sell unnecessary services to boost their commission. With CPVC piping, this can happen when a plumber is called out for a water heater change and causes damage to the system through improper tool use. They may then claim the entire system is faulty and needs to be replaced, which is probably not the case.

If a contractor encounters a piping material that has been subject to a class action lawsuit, such as polybutylene or some PEX pipes, a repipe may be recommended pro-actively and may be a good idea, especially if the homeowner intends to sell their home.

Likewise, if copper or galvanized iron piping shows significant signs of corrosion, a repipe may be recommended as a preventative measure, before the corrosion results in a failure.

With CPVC piping, a repipe is generally not needed unless the homeowner is experiencing spontaneous leaks – meaning leaks that randomly occur that are not related to another plumbing service call. In CPVC, this can happen if the plumbing pipes were improperly installed or exposed to harmful, incompatible chemicals. Because CPVC is a very robust system, it may take several years before the stresses of poor installation results in a spontaneous failure.

Knowing when to repipe a house or building and when to stick with your current plumbing doesn’t have to be complicated. With this information you can make better, more informed decisions about when pipes need to be replaced and the right material to use in the replacement.