The first post in our Healthy Home series reviewed the difference in the biofilm growth potential of PEX and CPVC piping while the second outlined the dangers that can occur if chemicals such as pesticides permeate PEX piping.

While the health risks exposed in those posts come from bacteria growing inside the pipe or materials that contact the outside of the pipe, this post focuses on the risk the pipe itself can present to water quality.

Water quality can be impacted when compounds from within the pipe are released into the water, as water flows through it, through a process called leaching. All materials have the potential to influence water quality in this way. The industry standard for preventing unsafe health impacts from plumbing systems due to chemical leaching is NSF 61.

FlowGuard Gold® CPVC is certified to NSF 61 under all water conditions. Not all materials can say that. Some PEX products are not certified to NSF 61 at elevated temperatures. In soft water (pH below 6.5), copper piping may leach metallic contaminants above the recommended limit for safe drinking water, and research shows that copper can damage a human protein that defends against Alzheimer's disease.

However, plastics have gotten the majority of the attention lately and the results of scientific studies focused on leaching clearly demonstrate that different piping materials pose significantly varying risks of leaching.

Many brands of PEX are known to leach gasoline components MTBE, ETBE, TBA and Toluene. MTBE in particular is a problematic leachate because it is a highly regulated water contaminant in multiple states following groundwater contamination incidents resulting from its use in gasoline. Research shows that some brands of PEX may exceed the regulated limits in some states.

In one court case, Defren v. Trimark Homes, PEX piping was claimed as the source of chemical leaching which resulted in a chemical poisoning diagnosis. That court case was eventually settled by the builder, plumber and PEX manufacturer. 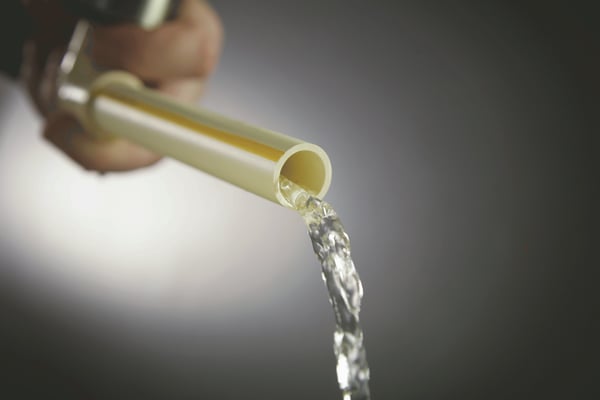 Fortunately, builders and plumbing contractors have a healthy choice for cost-effective and easy-to-install piping and fittings. FlowGuard Gold pipes and fittings are routinely tested to the highest standards for water quality, are compatible with chlorine-based water disinfection and fully comply with NSF 61. FlowGuard Gold piping systems outperform PEX in the areas of water quality impacts, biofilm growth potential, and chemical permeation.